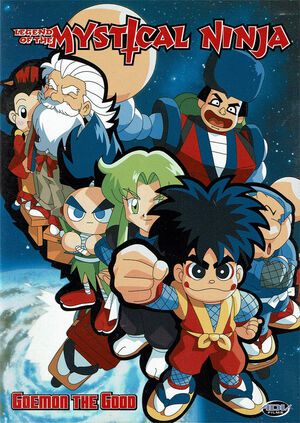 Anime Ganbare Goemon (アニメがんばれゴエモン, Anime Ganbare Goemon?) is an anime television series based on Konami's best-selling video game franchise Ganbare Goemon. The series was produced by Trans Arts, aired from 1997 to 1998, ran for 23 episodes, and 5 volumes of videos were released on VHS and DVD. It was eventually picked up in North America for an English dub done by ADV Films under the name Legend of the Mystical Ninja.

The Demon Lord Makamuge intends to conquer both the game world and the real world, and it's up to Goemon and his friends to prevent this from happening.

Retrieved from "https://goemon.fandom.com/wiki/Anime_Ganbare_Goemon?oldid=12357"
Community content is available under CC-BY-SA unless otherwise noted.