Baron is a character in Mystical Ninja Starring Goemon. He is one of Spring Breeze Dancin's four elite minions. His main mission is to turn Oedo Castle into a "beautiful stage".

Similar to the rest of Spring Breeze Dancin's minions, Baron wears a flamboyant military attire (in blue) and most of his head is bald (or shaved), with only a big chunk of hair coming from the top and carefully combed to the right, covering his eye.

He is quite feminine and well mannered, although he's known for losing his temper easily anytime someone calls him "weirdo".

Kashiwagi: A kabuki looking robot. The first Impact fight is against this evil robot. He constantly poses during attacks, making him quite vulnerable during this time. 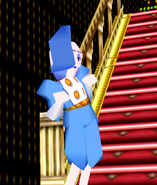 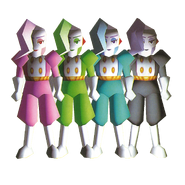 Add a photo to this gallery
Retrieved from "https://goemon.fandom.com/wiki/Baron?oldid=12191"
Community content is available under CC-BY-SA unless otherwise noted.