Bismaru (シスタービスマル, Shisutā Bisumaru?, "Sister Bismaru") is a crazy nun from future Neo Edo. He is an okama (cross-dresser/transvestite) who bares a striking resemblance to Ebisumaru, allegedly being his French-Catholic descendant from the future, explaining why he is dressed like a mix between a nun and a miko/shrine priestess.

He made his debut in Ganbare Goemon 3: Shishijūrokubē no Karakuri Manji Gatame, and later reappeared in Goemon's Great Adventure.

He is voiced by Kenichi Ogata (who also voices Ebisumaru).

Bismaru kidnaps the Wise Old Man when he was visiting the future while testing his new time-traveling machine, and somehow gets himself stuck in modern day Edo. Goemon and friends then decide to set on their way to stop Bismaru and save the old man.

Bismaru tries to take over the world by siding with Lord Jurokubei, King of the Underworld, and appears several times throughout the game, either to taunt the heroes or even in a giant robot boss fight while piloting the Bis maru Elegant.

At the end, he's seen trying to comfort Jurokubei after he has been defeated, although for all response he's thrown away by him.

In his second (and last) appearance, Bismaru steals the Wise Old Man's "Super Gorgeous Ghost Machine" in order to use it to revive Dochuki, Prince of the Underworld, marry him and take over the world.

Bismaru is later seen with Dochuki, although he's once again thrown away by the latter's psychic powers. He reappears at the end when Ebisumaru's presumed daughter presses the "Summon Again" button on the machine. 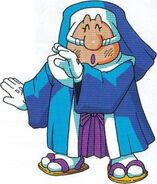 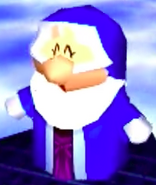