The MSX2 version was later released on the Virtual Console in Japan on February 25, 2015 for the Wii U.

The game revolves around the main character, Goemon, and his exploits. As the name suggests, his character was based on Ishikawa Goemon, the noble thief of Japanese folklore. Unlike its sequels, this game still does not feature the comic situations and strange characters that later defines the series, and Goemon is portrayed as a noble thief rather than a plain hero.

The game plays in a top view action/adventure game (similar to The Legend of Zelda), although it is separated by stages. In each level, Goemon must find three passes in order to advance. Some of these passes are found in boxes, secret passages or can be bought. After finishing all the stages, the game will present the player with a new Japanese province (eight in total), but all the levels will remain the same. The ending, however, will be different.

Like the rest of the series, Goemon can be powered-up if certain items are found and/or bought, which in turn can be lost after taking a few hits.

The MSX2 version has the option to be played in turns by two players, with the second player playing as a ninja named Nezumi Kozō, which is the basis of Goemon's sidekick Ebisumaru. In addition, unlike the Family Computer version, the game has six more provinces with completely new levels after finishing the game once. 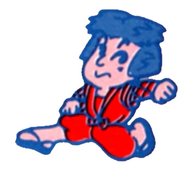 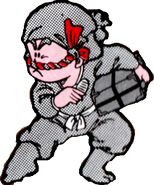 Add a photo to this gallery
Retrieved from "https://goemon.fandom.com/wiki/Ganbare_Goemon!_Karakuri_D%C5%8Dch%C5%AB?oldid=11683"
Community content is available under CC-BY-SA unless otherwise noted.