The OVA stars the voices of Daiki Nakamura as Goemon and Hideyuki Umezu as Ebisumaru, and features segments parodying three other popular Konami franchises: Gradius, Akumajō Dracula and TwinBee.

A humorous action adventure that takes place when a dimensional castle suddenly appears in the outskirts of Edo town. Goemon and Ebisumaru team up once again in order to investigate what's really behind the apparition of this mysterious building. The story takes our heroes in adventures parodying three of Konami's most popular franchises.

One night, a UFO suddenly appears on the sky above the forest at the outskirts of Edo town and crashes into the ground, revealing to be a huge spaceship in the shape of a medieval Japanese castle. The next day, a mysterious little character appears in town, and following his master's orders, kidnaps local belle Omitsu from the tea shop she works at and takes her into the castle. Being informed about this, Goemon and Ebisumaru decide to go investigate.

They break into the castle, where its owner challenges them to dare and reach the top floor where he will be awaiting them; although in order to do so, they'll first have to go through three dimensional floors, each presenting a unique and fantastic adventure. Every time they reach one of these floors, the world around them changes and they transform into the respective protagonists of that world. Their journey takes them through a battle in space, a vampire's castle, and soaring through the sky while riding a fighter aircraft.

They eventually reach the top of the castle, where Omitsu is held captive. Finding themselves cornered, the lord's minion creates an illusion and transforms his master into a very handsome prince, to which Omitsu instantly falls in love with. The happy couple then settle to be married the next day.

At the wedding, the illusion suddenly loses effect and the lord transforms back to his monstrous real form, but the minion quickly recasts the spell and gives his master his good-looks back. The spell doesn't last long, however, and just after a few seconds it once again vanishes away. Horrified by his hideous true form, Omitsu punches the lord in the stomach. The minion once again recasts the spell, but each time the effect lasts less and less time, resulting in Omitsu punching the owner every time he changes back to his real form.

The castle resembles a Japanese-style pagoda and has three dimensional floors, making it impossible to reach the top until each one has been cleared. Each one of these floors is based on a Konami game, and once entered, the person becomes a character belonging to that world, allowing them to rewrite its history.

A space confrontation against a big core while riding the Vic Viper.

The heroes make their way to the top of the Demon Castle and confront Dracula. However, they find Christine being held prisoner there instead of Omitsu.

The heroes are invited by WinBee (Pastel) to try for that day's highest score. They decide to go to a public bath for a break on the way.

Goemon
Voice: Daiki Nakamura
Infiltrates the dimensional castle in order save Omitsu from the clutches of his owner.
Ebisumaru
Voice: Hideyuki Umezu
An eccentric ninja, and partner and best friend of Goemon. He changes into various different characters inside the dimensional castle but keeps his distinctive personality intact.
Omitsu
Voice: Miki Itō
A celebrity in Edo town. Works at a local tea shop.
Castle owner
Voice: Kiyoyuki Yanada
Lord of the dimensional castle. He travels the galaxy in search of a bride.
Minion
Voice: Kumiko Nishihara
Follows his master's orders without question and can cast some spells.
Christine
Voice: Yumiko Shibata
Dracula's prisoner who is being held captive at the top of his castle.
Mr. Gen
Voice: Toshiyuki Morikawa
A resident of Edo town.
Kim
Voice: Wataru Takagi
A resident of Edo town.
WinBee
Voice: Kumiko Nishihara
An amicable pilot who invites the heroes to partake in a race through the sky. Although Pastel plays this part in the story, she was called "WinBee" instead because there was no name setting at the time. Her ship is actually the real WinBee.
Dimension
An imaginary narrator. 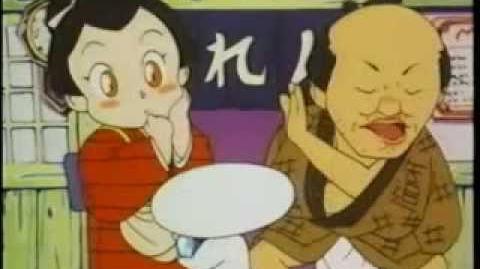