Disaster strikes when Goemon and Ebisumaru are sent to jail for crimes they didn't commit! After being freed from jail by their female companion Yae, they soon discover that poor-looking phonies are causing mischief under their names! You'll have to put a stop to these impostors to clear your name and save Edo from disaster. 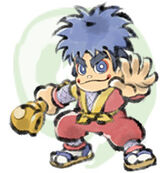 Goemon
He's brave and strong as you can see.

Ebisumaru
Fat and hungry all the time.

Add a photo to this gallery
Retrieved from "https://goemon.fandom.com/wiki/Ganbare_Goemon:_Tōkai_Dōchū_Ōedo_Tengu_ri_Kaeshi_no_Maki?oldid=13174"
Community content is available under CC-BY-SA unless otherwise noted.