Ganbare Goemon 2: Kiteretsu Shōgun Magginesu (がんばれゴエモン2 奇天烈将軍マッギネス, Ganbare Goemon 2: Kiteretsu Shōgun Magginesu? lit. "Let's Go! Goemon 2: Very Strange General McGuiness") is a Super Famicom game by Konami released only in Japan, and the second of the SNES Ganbare Goemon games. This game was re-released along the first SNES Ganbare Goemon: Yuki-Hime Kyūshutsu Emaki (which was released outside Japan as The Legend of the Mystical Ninja) in a Game Boy Advance compilation, which also remained in Japan. This game marks the debut of Goemon's giant robot Impact and of the clockwork ninja Sasuke as a playable character (he previously debuted in Legend of the Mystical Ninja as a boss). The game has similarities to Super Mario World but it is shorter and arguably much more difficult.

After rescuing Princess Yuki and saving Edo, Goemon and Ebisumaru decided to take a vacation at the Ryūkyū Resort when suddenly Sasuke appears and tells them that Japan is being threatened by the Western general McGuiness, who along with his army of bunny men, tries to westernize Japan. Goemon, Ebisumaru and Sasuke head to bunny castle to stop McGuiness. As the trio chase him and his bunny men around japan, McGuiness schemes a plan where he kidnaps several non-playable characters

Ganbare Goemon 2 uses an overworld map similar to that of Super Mario World, where the levels are arranged in a set order of worlds, each of them containing normal stages, towns, castles and giant robots. Unlike previous games, the levels can now be replayed. Like in Super Mario World, there are several areas that had to be unlocked by accessing alternate routes.

The characters' common moves are moving, crawling, jumping and attacking. There are two ways to attack: either with a short-ranged weapon or with projectiles. However, using projectiles consumes coins.

The characters themselves (Goemon, Ebisumaru and Sasuke) have their share of differences; Goemon is the all-round average character who uses his pipe as his main weapon, and as projectiles he tosses coins. Ebisumaru is slow and not very agile, but he is the strongest of the bunch, and uses fans to attack, as well as a projectile that rebounds walls. Sasuke, on the other hand, is quick and agile, but he is not very strong, and uses his kunai to slice enemies, and a firecracker bomb.

The towns are also present in the map (now separated from the stages themselves), in which the characters are able to buy food, armor, items, rest in an inn or save their progress via battery back-up.

At the end of a world there is always a castle, where a boss lurks. In some areas, the last stage involves fighting a giant robot, which must be defeated by controlling Impact. The game switches to a first-person view and Impact counts with a series of punches, giant coin projectiles (similar to those of Goemon) and a bomb attack. He can also guard.

Like the previous game, there are also shops with plenty of mini-games to play at, including the second level of the arcade-only game Xexex.

Several other Konami characters make cameo appearances in the game, including Simon Belmont, Sparkster, Pastel and Draculan (a parody of Dracula from Castlevania) as a hidden boss. 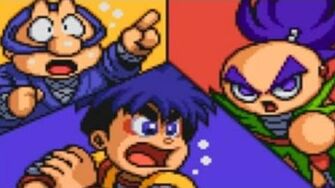 Retrieved from "https://goemon.fandom.com/wiki/Ganbare_Goemon_2:_Kiteretsu_Sh%C5%8Dgun_Magginesu?oldid=12889"
Community content is available under CC-BY-SA unless otherwise noted.