1 or 2 players
Ganbare Goemon 3: Shishijūrokubē no Karakuri Manji Gatame (がんばれゴエモン3～獅子重禄兵衛のからくり卍固め～, lit. "Ganbare Goemon 3: The Mecha Leg Hold of Jurokube Shishi"?) is an action/adventure platformer video game developed and published by Konami, and originally released for the Super Famicom on December 16, 1994 in Japan. It is part of Konami's popular Ganbare Goemon series, and the third one of the franchise on that console.

The game follows the exploits of the protagonist Goemon as he struggles to rescue the Wise Old Man, who has been imprisoned by the evil nun Bismaru far in the future. The game is the first in the series in which the classical quartet (Goemon, Ebisumaru, Sasuke and Yae) are all playable. The magical abilities of the four characters are introduced (Goemon's Sudden Impact and Yae's Mermaid Transformation Technique, for example) and also the first one in which Yae is a playable character in the main series.

This installment takes a radical departure from other games in the series, where they were arranged in levels and worlds. In this case, the areas are totally interconnected, similar to The Legend of Zelda series, including the use of certain items in order to pass previously inaccessible areas. 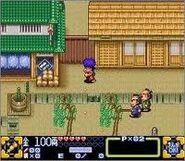