The game features three playable modes, each symbolized by a specific character. There is a Goemon-based mode, Ebisumaru-based mode, and Princess Yuki-based mode. It has been assumed each mode has a unique song sung by that character. This pachisuro also features many remixes of previous Goemon music (mostly from Goemon's Great Adventure).

The game was announced on February 4, 2009, with the opening of the official website. The site displayed highly detailed 3D rendered pictures of the characters, along with a CGI trailer that runs for one minute and thirty-three seconds. On February 17, 2009, a second trailer was released. This seven minute video went into the game in more detail, explaining various aspects and showing more clips.

The game was released in Japan on May 25, 2009, and is unlikely to leave into overseas territories. This is the third installment for arcades by Konami based on their Ganbare Goemon series since Mr. Goemon back in 1986 and the medal game in 1997.

A sequel was released on September, 2011. 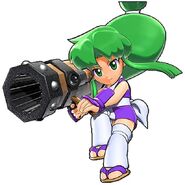 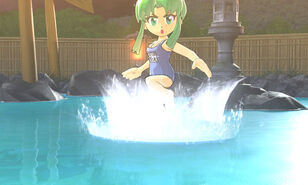 In-game scene featuring Yae.
Add a photo to this gallery

Retrieved from "https://goemon.fandom.com/wiki/Ganbare_Goemon_Pachisuro?oldid=9316"
Community content is available under CC-BY-SA unless otherwise noted.