For other uses, see Goemon (disambiguation).

Goemon (ゴエモン, Goemon?) is a video game character and the main protagonist of Konami's extensive Ganbare Goemon saga (known in the West as Mystical Ninja).

Goemon is a heroic bandit ninja whose actions are always motivated by a noble cause and his strong sense of justice. In his first appearances, he was a simple thief ninja who infiltrated castles and had to outwit the guards, but as the series evolved he became a warrior hero who fights against powerful villains with his friends to defend the ancient Edo and its inhabitants.

Goemon was renamed "Kid Ying" in the North American localization of the game The Legend of the Mystical Ninja, but in later adaptations he retained his original name.

Goemon is based on a real historical figure from Japan called Goemon Ishikawa, who lived in the 16th century. He was a famous bandit, although little is known about his real history. After his death, he was turned into a character in several traditional theatrical representations in Japan, where heroic attributes and fantastic ninja powers were added to his persona that made him a true legend. Ishikawa is compared in the West to Robin Hood, since he robbed the rich to distribute the loot among the villagers. According to the stories, Ishikawa ended up being caught and condemned to die by burning in a gigantic pot of boiling water. Konami used this legend to create his own version of Goemon, who originally appeared in the year 1988 in an arcade video game, Mr. Goemon. This adaptation of the character initially looked a lot like depictions of the historical Ishikawa, but in each new game, the universe around him was widely enriched with the addition of all kinds of fantastic characters, crazy villains and adventures in incredible locations. He primarily uses a variety of kiseru (smoking pipes) as his weapon of choice.

Goemon is described as a hot-blooded character with a strong temperament, having the personality of a typical Japanese hero. Although he appears to be carefree, he has a great sense of justice and his misdeeds are motivated by a noble cause, always seeking to help those in need. In the various games he has appeared in, he has always remained an enemy of the guards, who will start chasing him in large numbers as soon as they see him breaking the law.

Goemon is always accompanied by various allied characters; the best known is his inseparable companion, the fat ninja Ebisumaru, who is in charge of bringing comedic relief to the games they appear in with his strange behavior. Other ninjas who have helped him fight in many adventures are the ninja girl Yae and the android Sasuke. Also featured are the secondary characters Monoshiri Ojīsan (the Wise Old Man), who acts as a kind of mentor, and the beautiful villager Omitsu, who is Goemon's girlfriend.

The Ganbare Goemon series, due to its original gameplay and sense of humor, had great success in Japan and more than twenty video games were released in various platforms. However, in the West it has not been so widely distributed and only a few titles have been exported under the name of "Mystical Ninja".

In the future, his descendant is referred to by the same name.

Although in the anime he is given a more sweet caring outlook, he is very hot-blooded in the games. Always itching for a fight. He is known for his strong sense of justice, being the noble thief that he is. In early games, such as Mr. Goemon, he is portrayed as being more chivalrous and does not smile very often compared to later games. Beginning with The Legend of the Mystical Ninja, he is portrayed as more of a hero, defeating evil threats to Edo instead of stealing from the rich. Although he originally had many samurai and ninjas chasing him (due to a large bounty on his head), now his enemies are more often the main villain's henchmen. The Lord and Princess Yuki now see him in a more positive way, shown by their apology in Ganbare Goemon! Karakuri Dōchū. In the Nintendo 64 games, many people that resemble his former enemies act in a friendly way to him. This change can be seen in Bōken Jidai Katsugeki Goemon, where he is not a thief at all.

Throughout the different installments of the Ganbare Goemon series, the character of Goemon has gone through important changes in his design: 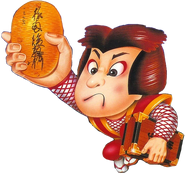 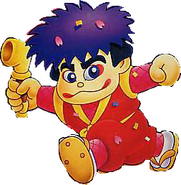 Goemon artwork from The Legend of the Mystical Ninja. 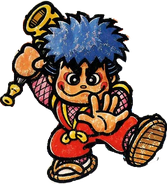 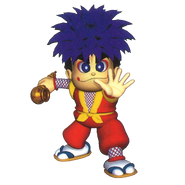 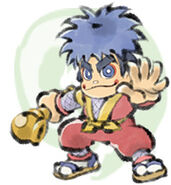 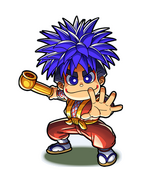 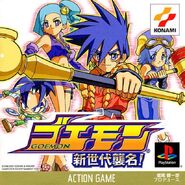 Goemon in the opening of Shin Sedai Shūmei!

Goemon is a fast and strong ninja who fights using his pipe. In video games, he is often seen using the following skills:

Goemon also possess an array of magical techniques –or Ninjutsu– that are very different and diverse in each game, such as:

Goemon Impact is an extremely powerful giant robot that Goemon pilots to combat giant enemies, much in the style of Japanese tokusatsu shows. He appears in various video games in special sections where he advances destroying everything in his path while tiny enemies try in vain to stop him. These sections end in a duel against a giant enemy that is seen from inside the cockpit.

Goemon Impact's ridiculous design is based on an old Konami advertisement for the game Ganbare Goemon! Karakuri Dōchū, where a man appeared in a Goemon costume and a huge mask that was used as Impact's head. He also wears the same uniform that was seen in Goemon's old design.

In many games of this series, Goemon appears as the challenger character while playing the "Ganbare Goemon Medley" theme.

The thief that Goemon is based on. He has been the star of many kabuki plays and puppet theaters, like Sanmon Gosan no Kiri.

Goemon, along with Ebisumaru, Yae and Sasuke, have cards in the Yu-Gi-Oh! trading card game. This character's card is "Goe Goe the Gallant Ninja", likely changed as to not seem out of place in Yu-Gi-Oh's universe, similar to how Simon Belmont's card is named "Vampire Hunter".

In Super Smash Bros. Ultimate, appears as a Mii Costume for the Mii Swordfighter as part of Wave 3.