The Hannya Shogun is a character in The Legend of the Mystical Ninja. He is the main antagonist of the game, an old man who hides under the guise of a young and strong leader.

The Hannya Shogun, as his name implies, is the leader of the Hannya, an organized group of masked thieves who use counterfeit money in order to perform criminal activities.

He orders his men to kidnap the Ruler of Edo and his daughter, Princess Yuki. He keeps the princess confined under his own guard and throws the feudal lord into the dungeons, taking on his guise so that he can perform crimes at his leisure while remaining unnoticed.

He is aided by Gonta, a mystical fox who gives him all his powers. He also wears a giant armor in the shape of a fierce samurai warrior in combat.

In the end, Goemon and Ebisumaru manage to defeat him, and looking himself cornered, he threatens to harm the princess. Gonta hearing this, confronts him saying that wasn't part of the plan and that he promised the princess would be released. He then breaks their partnership and disappears in a puff of smoke. Goemon steps forward and whacks the shogun with his pipe, making his mask to fall off and revealing the 'dreadful' Hannya Shogun to be nothing more than a helpless old man. 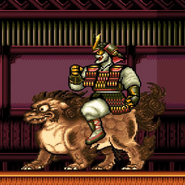 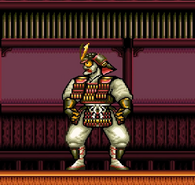 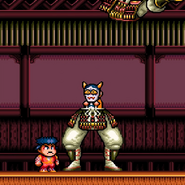 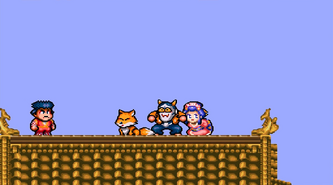 The shogun and Gonta cornered on the roof of Ryuku Castle. 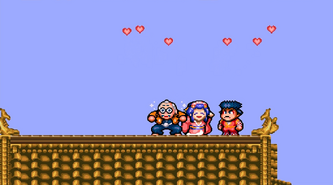 The shogun is revealed to be nothing more than a helpless old man.
Add a photo to this gallery
Retrieved from "https://goemon.fandom.com/wiki/Hannya_Shogun?oldid=10215"
Community content is available under CC-BY-SA unless otherwise noted.