Seppukumaru is an alien sportsman who has traveled all over the universe mastering all the sports he's come across. Seppukumaru's obsession with seppuku (ritual suicide) comes from the fact that he believes it to be the ultimate extreme sport and plans to be the first person to master it. The problem is that inside Seppukumaru's body, there is a bomb that will blow up the entire planet if it goes off. The barriers that Seppukumaru's own underlings erected in the moons of Planet Impact were to seal him away and prevent this from happening.

He is extremely determined to defeat Goemon, although he is also known for being extremely vain, to the point of referring to himself as "the sexiest man from both worlds".

In the anime, he is seen holding his own against Goemon for short periods of time, only to be overwhelmed in the end; however, in the game, he could only be beaten by summoning Impact. In the fight that ensued, he is shown to have enormous strength, as he would heave gigantic metallic spheres from his space ship at the friendly giant robot. Speaking of which, he is also shown to be able to survive and even fight in deep space without any issues.

He is seen in the anime fighting with a tantō, a ceremonial short sword, or just by using brute strength. On one occasion, he used a flute to summon birds to pester people. Although he used it only once, he appears to use the "rage gauge" as a source of power, as he used it in order to trap the police.

Goemon, Ebisumaru, Yae, and Omitsu visit the Wise Old Man to celebrate his 98th birthday. After surprising him (and Sasuke who was... dressed up for the occasion) the doorbell rings. The Wise Man answers and looks up to see Impact kneeling over, greeting him. He informs them he had just returned from Planet Impact, a place where everyone seems to look like him, only human-sized, and they seemed to greet Impact as their ruler. However, his reign as a king was cut short when the planet was invaded and overthrown by Seppukumaru and his forces, who took over the four moons around Planet Impact and set up a barrier around it. Thus, Impact has returned, and asks Goemon and his friends for help to defeat Seppukumaru and free 'his people'. Ready for adventure once more, the four of them naturally accept. Pleased and grateful to them, Impact stands and turns around, but his leg slams into the Wise Man's temple and topples it over by accident. Apologizing, he takes off into space with Goemon, Ebisumaru, Sasuke and Yae, leaving the Wise Man to rebuild his home.

Arriving at the planet, Impact drops the four off, each on one of the moons: Goemon on the Desert Moon, Ebisumaru on the Forest Moon, Sasuke on the Ice Moon, and Yae on the Water Moon. The four soon find that Seppukumaru is obsessed with all kinds of sports, as his compounds and fortress are littered with various sports themes. Along the way, Goemon meets up with a tanuki who impersonates Omitsu, Ebisumaru runs into his eternal rival, Obisumaru, Sasuke goes on an errand to deliver medication to some patients, and Yae goes shopping for an odd clan of executioners.

Eventually, they all meet up with Seppukumaru's egg-shaped henchmen, the Four Tsujikiri, and to destroy each moon's barrier, they defeat them all one by one. One challenges Impact to a bungee-jumping match, the second presents him with an odd guessing game, the third races Impact across a track, and the fourth forces them to play a variation of Puyo Puyo. After toppling the barrier, they all arrive in Planet Impact. The four then run into Seppukumaru's four henchmen again, who yell at them and seem to tell them how to find their master, then disappear.

Finally reaching his domain, they fight through revised versions of the various sports fortresses they toppled before, and finally, face Seppukumaru in a showdown. It isn't a traditional battle, however, as the four and Impact are on the planet's surface while Seppukumaru is high above on the deck of his spaceship. Seppukumaru hefts a gigantic metal sphere and hurls it at Impact, thus leaving the fate of Planet Impact decided by a game of catch. Impact barely manages to catch the sphere and tosses it back at Seppukumaru, who is also able to catch it, although his spaceship gets damaged each time as the match continues. Eventually, the ship can't handle it anymore and breaks apart.

In a final 'sports play' Seppukumaru threatens to commit seppuku by plummeting toward Planet Impact and potentially destroying it as he dies. Not allowing the planet to be destroyed, Impact leaves the Goemon crew behind and flies up to catch the evil sports lord. He succeeds in catching him, although he knows that as long as Seppukumaru lives, Planet Impact and the rest of the Universe will be in danger, so while he has him in his clutches, Impact flies toward the sun in order to kill them both. Along the way, Impact sadly remembers all the good times he had with Goemon and the others, but is adamant to kill himself and his enemy for the good of all. Seppukumaru criticizes Impact for not being the proper way to play the seppuku-sports game. Impact then foolishly reveals to him that seppuku isn't a sport. Enraged, Seppukumaru breaks free, punches Impact away, and flies off. Impact thus fails to defeat Seppukumaru and realizes there will be danger as long as he is still alive. The others then start laughing at Impact because being so close to the sun frazzled his hair, so it looks more afro-y than usual, and they say he looks like a 'dancer'. Taking the comment to heart, Impact turns into a disco-dancer and boogies for the remainder of the credits.

Seppukumaru is Lord Makuamuuge's henchman, until he is replaced by Dr. Mudanashi due to his constant failures. At the end of most his attempts at beating Goemon and releasing Lord Makuamuuge, he usually tries to commit seppuku but fails due to the Four Tsujikiri or random occurrences.

Before being replaced by Dr. Mudanashi and Protein, he desperately asks Makuamuuge if he can commit seppuku. Makuamuuge simply replies: "Absolutely not!" and sends him to the Muuge hole in order to keep training.

He was voiced by Toshiyuki Morikawa in the original version, and David Born in the English dub. 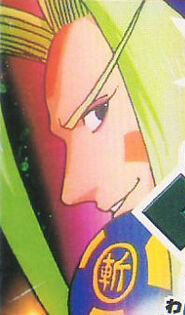 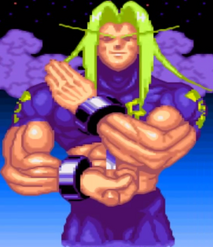 Retrieved from "https://goemon.fandom.com/wiki/Harakiri_Seppukumaru?oldid=12345"
Community content is available under CC-BY-SA unless otherwise noted.