First appearance of this enemy in the series. Making honor to his name, he appears in traditional kabuki makeup and carries a big box on his back from which he can shoot a myriad of flower petals which start raining down an are harmful to the touch. He can also hide inside his box and levitate about the screen.

Once the box is destroyed, he will start hoping around in an outright kabuki-dance style, and either send his helmet flying, which will then return to him as a manner of boomerang, or spew poisonous fumes.

Kabuki returns revived as a cyborg. He retains most of his attacks, albeit with minor modifications. This time he uses jet propellers mounted on his feet in order to take flight, and instead of sending his helmet flying, he now spews tracking fireballs.

In Ōedo Daikaiten, Kabuki has gone through some alterations and features new attacks. Perhaps his most notable trait is that now he carries what appears to be a giant soft drink can on his back instead of his characteristic box.

He can hover in the air and send out four fans flying, which then home toward the player's current position one at a time. Most of his attacks now include the use of a traditional oil-paper umbrella. He frequently hides behind it and starts rolling around the screen in a determined pattern, attempting to inflict contact damage to the player.

This fiend returns one last time and it is the seventh boss, now under the name of Kabuki 64. Although supposed to be dead, he returns from the abyss of the Underworld. His goal is to get revenge on the team for his defeats in the past. He wields two geta as weapons and appears in two different forms: first in his usual humanoid form, and then transforming into a giant robot.

Kabuki appears in the manga. 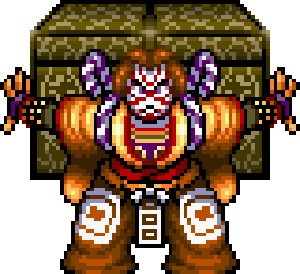 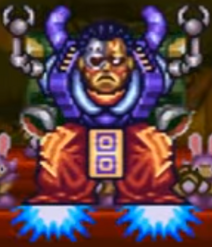 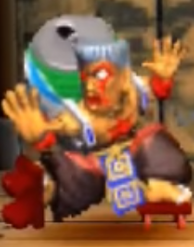 Goemon's Great Adventure
Add a photo to this gallery

Retrieved from "https://goemon.fandom.com/wiki/Kabuki?oldid=12367"
Community content is available under CC-BY-SA unless otherwise noted.