Kitty Lily (known in Japan as Margaret Ranko (マーガレット・ロンコ, Māgaretto Ronko?)) is a character in Mystical Ninja Starring Goemon. She is one of the two main antagonists in the game and is Spring Breeze Dancin's loyal sidekick and partner in crime. Her main objective is to transform all of Japan into a theatrical stage.

Kitty Lily was one of the leaders of the Peach Mountain Shoguns, a group of theatrical performers whose goal was to turn all of Japan into a beautiful stage so they could become big stars. Lily, along with her lifetime partner in crime, Spring Breeze Dancin', started by turning Oedo Castle into a western medieval-themed stage for this purpose, endangering the Lord and Princess in the process.

Lily first reveals to Goemon and his friends after they succeed in defeating the giant robot Tsurami and meeting its owner, Sharon. She later reappears in company of Dancin' at the end of the Gourmet Submarine, where they order Sharon to activate the self-destruct mechanism. Goemon and allies manage to escape the explosion thanks to Impact's help.

Lily and Dancin' meet Goemon once again at their base in outer space, although this time around the meeting turns into something quite out of the ordinary, and instead of the usual talk, threats and mocks, they perform a musical number along with the Flake Gang where they sing the song "Gorgeous My Stage". After the number is over, and not to lose the habit, they once again activate a self-destruct mechanism and make their escape.

Once again, Impact comes to the rescue and the team manages to escape to open space, where they fight and defeat another giant vessel. At this point, Dancin' and Lily decide to take matters into their own hands and face the heroes themselves by piloting their own giant robot: D'Etoile.

They engage in one final battle with the heroes, only to face defeat. Dancin' mocks Goemon one last time, calling him "Fernandez", but Impact blasts D'Etoile's head off, launching Dancin' and Lily further into space. They get trapped in space without ways to return.

Goemon and allies return to Japan, seeing Kyushu return. The town's girls can be seen running from the distance toward Goemon and allies, who believe they are admiring them and want their autographs. However, it turns out they liked Spring Breeze Dancin' and Kitty Lily and are enraged they got rid of them, shocking the team.

In Ganbare Goemon: Ōedo Daikaiten, only Dancin' was attracted to Earth thanks to the power of Ecorori recycling to take revenge on Goemon. Kitty will not appear. 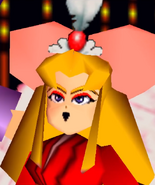 Retrieved from "https://goemon.fandom.com/wiki/Kitty_Lily?oldid=11197"
Community content is available under CC-BY-SA unless otherwise noted.