Kurobei (忍者猫 クロベエ, Ninja Neko Kurobē?) is a recurring character in the Ganbare Goemon series. While at first sight he appears to be nothing more than Princess Yuki's pet cat, he is actually a highly-trained member of a clan of ninja cats.

Kurobei first met Goemon in Goemon Gaiden: Kieta Ōgon Kiseru. Since then, he has frequently aided him and his friends on their missions, although he is only playable in a few games.

He made a notable appearance in The Legend of the Mystical Ninja, where he is turned into a Ghost Woman and acts the the boss of the first level. After being rescued and shifting back to his feline form, he reveals the heroes to be part of a clan of ninja cats leaded by their master, Koban. He then gives them some money and asks them to go to Shikoku Island in order to meet him.

He makes a small cameo in Ganbare Goemon 3: Shishijūrokubē no Karakuri Manji Gatame, where he once again appears as the Ghost Woman at the outskirts of the first town. This time, however, he does not attack the heroes, explaining he just adopted that form in order to investigate while undercover.

Kurobei makes another prominent appearance in Goemon: Mononoke Sugoroku, where he is apparently being controlled and acts as the first main enemy of the game.

Kurobei makes a cameo appearance in Jikkyō Oshaberi Parodius. Much like in The Legend of the Mystical Ninja, after defeating the parody of the Ghost Woman, she turns back into Kurobei. 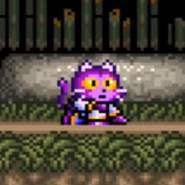 Kurobei in The Legend of the Mystical Ninja 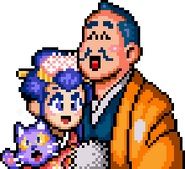 Kurobei, Princess Yuki, and the Ruler of Edo in the ending of The Legend of the Mystical Ninja

Kurobei cameo in Jikkyō Oshaberi Parodius.
Add a photo to this gallery
Retrieved from "https://goemon.fandom.com/wiki/Kurobei?oldid=12572"
Community content is available under CC-BY-SA unless otherwise noted.