Main antagonist
King of the Underworld

Jurokubei is Goemon's descendant from the future who grew reading about the ruthless legendary thief who robbed people blind. Once he is told said thief is Goemon and that he was like a Robin Hood figure, he immediately turns good. 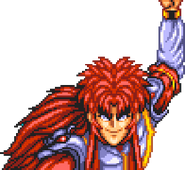 About to summon Dark Impact.
Add a photo to this gallery

This article is a stub. You can help the Ganbare Goemon Wiki by expanding it.

Retrieved from "https://goemon.fandom.com/wiki/Lord_Jurokubei?oldid=9758"
Community content is available under CC-BY-SA unless otherwise noted.