Princess Yuki (結城姫, Yūki-hime?) is a recurrent character in the Ganbare Goemon series. She is one of the rulers of Edo, along with her father, Lord Yuki.

Despite both she and her father being the rightful rulers of Edo, they do little that inspires leadership. More often than not, they too are preyed on by evildoers and generally end up on the receiving end of very unfortunate situations, even when they have relatively nothing to do with the current story's events. The lord and princess are described in the instruction booklet for Ganbare Goemon 2: "They are born to be at the wrong place, at the wrong time."

Yuki becomes the central focus in The Legend of the Mystical Ninja, where she gets kidnapped by an unknown fiend, with no one knowing where she has been taken to or even the reason why.

After being rescued by Goemon and Ebisumaru, Koban, a leader of ninja cats, informs them of the kidnapping and begs them to go rescue her, telling them what little information he knows about her whereabouts.

After going through many hardships, our heroes finally get on the right track and discover the princess is being held prisoner in the kingdom of Ryukyu. After a fierce battle, they succeed in rescuing Yuki, only for her to be immediately recaptured as they attempt to return her back home, as the dreadful Hannya Shogun reveals himself to have been posing as the Ruler of Edo.

After escaping from their cell with Yae's help and fighting the remaining Hannya army in their own headquarters, they successfully manage to defeat their leader and rescue the princess a second time.

Yuki has a significant role in Ganbare Goemon Pachisuro, notably singing a song during gameplay. 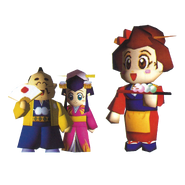