Sasuke (サスケ, Sasuke?) is a character and one of the main protagonists in the Ganbare Goemon series. He is a skilled ninja warrior robot created by the Wise Old Man, whom he cares for as if he was his own father.

Sasuke is good friends with Goemon, Ebisumaru and Yae, and together they usually join forces in order to bring peace and justice to the world whenever it's needed.

The powerful "Clockwork Ninja" created by the Old Wiseman Monoshiri. Sasuke is a highly adaptive combat robot who originally provided Monoshiri protection as the Jounin (Head Ninja) of a band of clockwork ninjas. He made his first appearance when Goemon and Ebisumaru "invaded" Monoshiri's home. It wasn't until after a climatic battle that they learned the whole incident was a misunderstanding. Since then, he has frequently been sent out to help Goemon during times of calamity.

Sasuke is a very straight arrow and honest character, a true boy scout/soldier type. True to his personality, he is also fairly naive, incapable of doubting the meaning of even the most sarcastic of statements. Because of this, he is often puzzled and confused with Goemon and Ebisumaru, as they are more relaxed and lax individuals. Overall, Sasuke has learned that he can trust in Goemon's leadership and judgement when things get serious.

Known to few, Sasuke is built with a purposeless and highly dangerous internal switch that changes him from his normal altruistic personality to a savage villain. An explanation has yet to be given by Monoshiri for why this switch exists. Sasuke is also built with the miraculous ability to actually eat and drink food for energy. Among his favorite pastimes, surprisingly enough, are baths and drinking hot tea.

Sasuke can be understood to have a faint link to the legend of Sasuke Sarutobi, a heroic ninja figure from Japanese folktales. The tales of Sarutobi were the first to paint ninjas in a more positive light, as opposed to the usual dark role of assassin. As the Legend goes, Sarutobi got his start in Ninjutsu at the young age of 10, with the chance meeting of a mysterious old man while in the forest. This old man would soon become Sarutobi's Teacher of the art of ninjitsu. The legend's links to Goemon's Sasuke are basically limited to having an old man as a master, ninjitsu, and in the legend's beginning, being a child {C}The Kunai that Sasuke wield are among the most basic of ninja gear. A Kunai is a ninja's multi purpose survival knife, so it is only fitting that Sasuke would wield this weapon. As the third playable character in an action Goemon Game, Sasuke needed a secondary weapon that had different attributes from both Goemon and Ebisumaru. As both Goemon and Ebisumaru both had lateral tossing subweapons, it seemed natural to give Sasuke a uniquely arching bomb.

Sarutobi Sasuke (猿飛佐助, Sarutobi Sasuke?) was a famous ninja featured in many Japanese children's stories from 1911 to 1925. The character was immortalized in contemporary Japanese culture by the 1962 Sampei Shirato comic of the same name. Thereafter the name Sasuke become something of a default ninja moniker {C}He is generally believed to be a fictional creation of the Meiji era based on the historical ninja Kozuki Sasuke, though some argue for his actual existence. He is commonly listed as one of the Sanada Ten Braves, a legendary group of ten ninja that supposedly assisted Sanada Yukimura at the battles of Osaka Castle during the Sengoku period, and he is one of the best known among the Ten Braves. It is also said that he supposedly died in the Summer Campaign of the Siege of Osaka.

Sarutobi Sasuke is generally said to be a Kōga ninja, whereas Kirigakure Saizō, his fellow Ten Braves, is an Iga ninja. As such, when Sarutobi Sasuke and Kirigakure Saizō appear together, they are almost always depicted as arch-rivals and later, after being recruited to the Sanada cause, best friends. This rivalry parallels the Iga-Kōga rivalry and the Hattori-Fūma rivalries in ninja fiction.

Sarutobi, meaning 'monkey jump', is written with two Kanji; saru (猿) is the character for 'monkey', and tobi (飛) is the character for 'jump'. He was known for his monkey-like agility and quickness, especially in trees. Many depictions of him in Japanese pop culture portray him as having been orphaned and raised by a band of monkeys, therefore giving rise to the monkey-like abilities. When appearing with Kirigakure Saizō, he is often thus contrasted with his best friend/arch-rival, who is usually has an elegant, or at least clean-cut, appearance and magic-like ability. 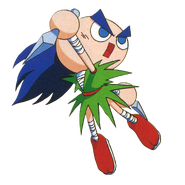 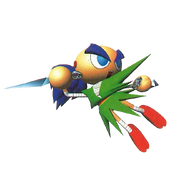 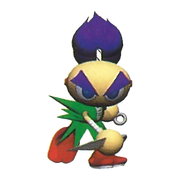 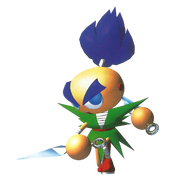 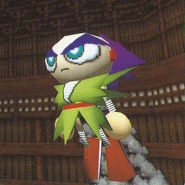 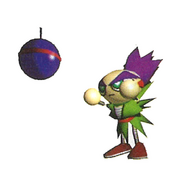 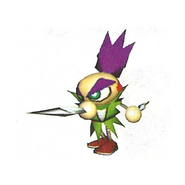 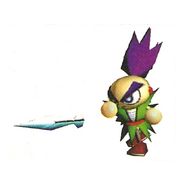 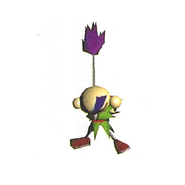 Sasuke in Pixel Puzzle Collection
Add a photo to this gallery

Retrieved from "https://goemon.fandom.com/wiki/Sasuke?oldid=11218"
Community content is available under CC-BY-SA unless otherwise noted.