Peaceful times were reigning in Wai Wai World, when suddenly a great wizard by the name of Warumon emerged from the darkness and swiftly conquered the land. In response, Dr. Cinnamon, who escaped the attack for being away on a sightseeing trip, created a super robot named "Rickle" by using his secretly developed "Konami Hero Transformation Circuit" and sent him forth to defeat Warumon.

When Warumon learned of Cinnamon's plan, he kidnapped Wai Wai World's Herb Princess and took her away to his base in outer space, known as "Parsley Castle". There, he revived villains that had been previously defeated by former Konami heroes and sent them over to stop Rickle.

There are also space shooter, driving, and puzzle levels. After certain levels, the player can choose different paths which consist of different stages. 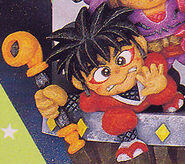 Rickle transformed as Goemon in the cover artwork.

Ebisumaru in the cover artwork.

Rickle transformed as Goemon in the instruction booklet. 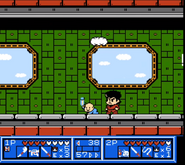 Rickle transformed as Goemon along with Upa in the game.
Add a photo to this gallery

Retrieved from "https://goemon.fandom.com/wiki/Wai_Wai_World_2:_SOS!!_Parsley_Castle?oldid=11256"
Community content is available under CC-BY-SA unless otherwise noted.