"Wisdom of the Ages"

The Wise Old Man (物知りお爺さん, Monoshiri Ojīsan?) is a recurrent character in the Ganbare Goemon series. He is an inventor and, as his name implies, is one of the greatest creators in Edo, as he builds many admirable devices, including Sasuke and Impact.

He enjoys chasing and looking at young women, looks at pictures of women in magazines, and a few of his inventions were built for aiding him get a closer look at them. In the non-Japanese versions of the games, however, he never mentions this, and his magazines are replaced with car magazines. He still retains these habits in the translation of the anime.

Sasuke: A robotic ninja that first protected the Wise Old Man. In a misunderstanding, he attacked Goemon and Ebisumaru. Now friends with them, he is a playable character in many games. In the anime, he is also designed to take pictures of young women, as he seems to attract women.

Time machine: Used in Ganbare Goemon 3 to travel through time. Originally designed to chase young women in the future.

Transporter: Used to transport characters in the game world to the real world.

Miracle Transport Machine: This "miracle" invention happens to be nothing more than an old, fuse-operated cannon that will send their occupants to their destination... most of the times.

"Cutie Detector": In the anime, used to take pictures of attractive women while shouting "Cutie alert!". It has some bugs, as it identified Tsukasa as a "cutie". 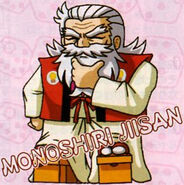