Yae (ヤエ, Yae?) is one of the main protagonists in the Ganbare Goemon series. She is a kunoichi working for a secret investigations ninja group, and as such has crossed paths with Goemon and friends during her missions, ultimately becoming good friends with them and often accompanying them on their adventures.

Yae is a kunoichi working for the "Secret Special Investigations Ninjas", a secret that conducts confidential investigations of high profile crimes and mysteries in Japan. She first meets Goemon and Ebisumaru in Ganbare Goemon Gaiden: Kieta Ōgon Kiseru. They cross paths once again in the Super Famicom game The Legend of the Mystical Ninja, where they rescue her from being held captive by the Otafu Army while on a mission looking for counterfeiters. She then gave them a lead by telling them to seek the aid of the Wiseman of Iga. She encounters them several times afterward in Ganbare Goemon 2, where she is working on leads to find out where Shogun McGuiness is. Despite her secret agent work, she still ends up being kidnapped by Magginesu, leaving Goemon, Ebisumaru, and Sasuke to rescue her along with Princess Yuki, the Lord of Edo, and Omitsu.

It is only near the beginning of Ganbare Goemon 3, at the end of the second stage, that she becomes a playable character, with her joining the party as they investigate a local fireworks town in an attempt to find a way to bring the Wise Old Man back from the future. She, along with Goemon and the others, ends up getting trapped in the futuristic Neo-Edo after sister Bismaru opens a time portal in Edo. It is only after gathering the eight Precious Metals and defeating Bismaru that Yae and crew are able to return to their time.

Some time after this, she joins Goemon and the rest of the group right from the beginning in Boku ga Dancer ni Natta Wake. It is in this game that Impact reveals he is a sentient robot and that there is actually a Planet Impact, where most of the citizens bear his face. Unfortunately, shortly after discovering this planet, the evil Harakiri Seppukumaru has taken it over, as well as placing a force field around the entire planet. This force field is kept in place by four generators, with one on each of Planet Impact's four moons. Yae is in charge of destroying the generator on the “water” moon, which she does after defeating the henchmen Seppukumaru charged with guarding it. She meets up with Goemon, Ebisumaru, and Sasuke on Planet Impact, where they work together with Impact in order to stop Seppukumaru from destroying the entire planet via giant metallic boulder. They are successful and Seppukumaru is taken to the sun by Impact, only to break free and cause Impact to be thrown back to Earth with the others.

In Goemon's Great Adventure, Yae encounters the others on Ryugu Island, where she tells them there is a great deal of supernatural activity going on around Japan. She travels with Goemon and company all over, until they enter into the Underworld. There, they find Dochuki, who had previously been released by Bismaru, and finally defeat both of them in the Sky Palace.

Yae is a very versatile character and is commonly the fastest playable character throughout the series. Her main weapon is a katana that, when powered up, increases in range and strength. She is also capable of generating a shield of sorts by rapidly spinning the blade, which effectively deflects any projectiles shot at her.

Her secondary weapon is a bazooka that when charged up, develops a targeting system that allows for homing shots to be fired from it. She is also one of two characters that can go underwater, as she is able to transform herself into a mermaid. If she tries to perform the Mermaid magic on land, however, she only ends up covered with scales from head to toe and quickly transforms back.

When she was first introduced into the series in Ganbare Goemon Gaiden: Kieta Ōgon Kiseru, Yae originally wore a blue shinobi shōzoku (traditional ninja outfit) with chainmail underneath and with visible parts on her chest and forearms. However, her most notorious trait would definitely be her jet-black long hair, which is tied near its end.

In her second appearance, in The Legend of the Mystical Ninja, Yae was slightly redesigned, with her outfit being changed to her now iconic purple color and her hair changed to blue.

In Ganbare Goemon 2: Kiteretsu Shōgun Magginesu, she went through another redesign, now bearing her iconic green long hairstyle and retaining this appearance for most of the series, whether it was in video games, anime, or diverse other media, with just slight changes inbetween.

In the 1999 Nintendo 64 game, Goemon: Mononoke Sugoroku, Yae went through her last major redesign, by ditching her full-body shōzoku and chainmail for a short-sleeved and skirted dress with separate protectors on her hands and ankles, an outfit she has retained until today.

In the animated series, Yae is an expert swordswoman and a top investigator for the "Secret Special Investigations Ninjas". As its name suggests, this organization conducts confidential investigations of high profile crimes and mysteries in Japan. Yae first met Goemon and Ebisumaru during an investigation where the main suspect was Goemon himself. 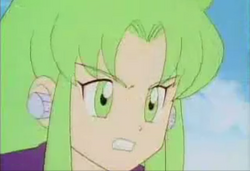 In the end, however, the culprit turned out to be an imposter using Goemon's guise, and Goemon was freed of all charges.

Since that first meeting and journey, Yae would constantly run into Goemon and Ebisumaru, with the reason being that the pair were always found intervening and attempting to stop the criminals Yae was investigating. As Goemon and Ebisumaru are often at the forefront against trouble in Japan, Yae frequently joins Goemon's party on their journeys and has become both a good friend and a powerful ally.

Unlike the others in Goemon's group, Yae is probably the most sensible and capable. She is respectively responsible, mature, and holds her temper. Because of this, she is the big sister figure of the group, looking after her comrades. Despite her line of work, Yae has a surprisingly "girlish" side, as her interests include fine art and baking. Most recently, she has taken a liking to sweet red bean cakes. Yae also has a reputation for completing her goals by any means necessary. This has been exploited often in the series by suggestive jokes.

She was voiced by Jessica Boone in English.

Yae has two alternate versions. In the revamped Bōken Jidai Katsugeki Goemon for the PlayStation 2, Yae is a younger character who is a member of a detective ninja squad. She encounters Goemon and the tiger cub Kotora, and helps them on their quest. The other version is the futuristic Yui of the Goemon: New Age series. In this adaptation, she handles the underwater sections of the game, as she still retains her mermaid magical abilities.

In the Yu-Gi-Oh! card game, along with Goemon, Ebisumaru, and Sasuke, she has two cards with a similar appearance, known as "Lady Ninja Yae" and "Ninjitsu Art of Transformation", who happens to look like an older version of her.